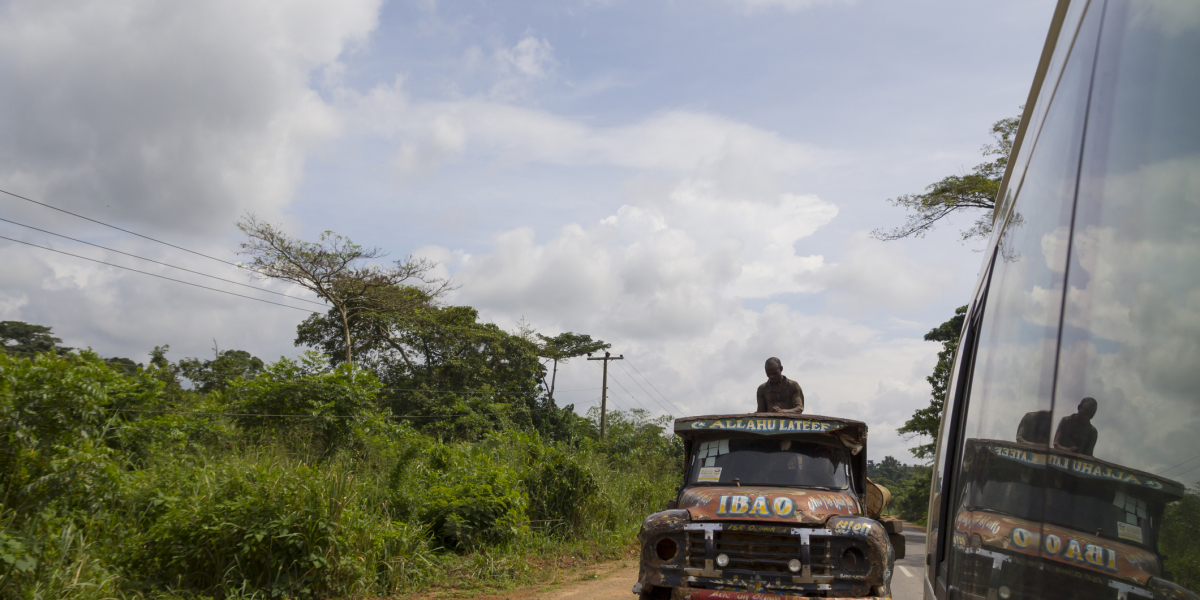 In Conversation With: Rafael Prieto Curiel

Rafael Prieto Curiel does not have a typical CV for an urban policy researcher.

Working for the Mexico City Police Department of Mexico City, he learned crime forecasting models and effective resource allocation. His work then took him to OECD, where he studied West African cities. Now, with PEAK Urban, he deploys mathematical tools to better understand critical issues, like migration and security.

Rafael spoke with us about the team’s approach, findings, and future implications:

So how did you come across this topic?

Rafael Prieto Curiel: Mobility studies are capable of tracing people using things like credit card purchases, text messages, or location using an application. The field has advanced significantly in recent decades with the availability of large amounts of data. But interestingly, mobility studies haven't been readily applied for certain groups, like terrorist organisations.

I’ve been part of a research group that focuses on West Africa—its cities, urbanization, and urban economy. Security is obviously a main issue. Africa currently has two major terrorist groups: al-Shabaab in East Africa, and Boko Haram in West Africa. Both are extremely powerful in many countries; it’s a regional problem, more than just an international one. So given that, I thought, ‘Let’s apply mobility studies in the West African security context, which is Boko Haram.’

What tools did you use to do this?

When you study individual mobility, you have to understand, ‘How long did they move? How frequent was it?’ And so on. So when you use your credit card in Tesco, and then in Sainsbury’s around the corner, and then in a bookshop, you can tell the person had to move from one place to another. You’re using the footprint of purchases.

The issue with Boko Haram — we don’t have purchases, because it’s a secretive group. Instead, we have the events in which they take part, which is similar. Once I started looking at this data, I noticed that frequently—almost daily—you would get one event in Maiduguri, in northeast Nigeria, and then just a couple hours later, another event in west Nigeria, at a distance of 200km. I was thinking, ‘How can they move so fast?’

So I spoke with Olivier, an area specialist, and what we were realising is that if it was the same person, they were moving too much. A single person, or a group of people, cannot move so fast around Nigeria’s territory. Because where they are, the infrastructure is extremely scarce. It used to be Lake Chad, which dried, so now there are disconnected tiny islands without many roads. In that context, you’re asking a person to move 300 km in two hours. That’s impossible. So how many individuals or groups could it be? By analyzing the footprint, we analyze the sequence. That led to two very simple rules.

First, let’s suppose a group can move a certain amount of kilometers at a certain speed. The speed is crucial, because it limits the group to being just one or maybe two cells. If they move at 300km per hour, completely invisible, then it could be the same group of people committing all the sequences of events. But if you put a restriction, like 100km an hour as the top speed, it already has to be multiple groups, because you don’t move that much. This led to an algorithm that analyzed the sequence of four events, using all possible speeds and distances.

Let’s say the picture above is a map of Nigeria, figuratively speaking, and we have five consecutive days. We say that if an event happened, then there’s a cell on day 1. They can move at a certain daily speed. If you see the green dot, they move maybe 60km the first and second days, in any direction. So we don’t know where they are, but we know they are contained within 60km per day. Some days, they are in this region, and that’s the speed. If on any day there is an event such as day 2—when one happens with no cell nearby, and we know cell 1 is contained in that circle, and day 2 is an event far away from the possible locations of day 1—then we say, ha, there has to be a second cell in here.

By day 2, we know there are two individuals. On day 3, there are no events, so we’re losing information. It diffuses the location of cell 2. Then on day 3, there’s another event that’s far away from everyone, so now there are three different cells. But also, the assumption is that, for instance, if you look at the day 2 cell, there is an event that was too close. So it’s likely the cell that committed this event is actually the one very close by. We assume it was, just to minimize the number of cells, and update the location of the cell as well as our information. We lose information as days go by on the location of cell 2. But because there was another event, now we know exactly where they are.

So once you created this, what were you able to infer about Boko Haram?

We analyzed seven years of events  (2012-2019) from Boko Haram with this procedure using two parameters: speed and maximum distance. I analyzed it thousands of times with different speeds and distances. And the result looks something like this. 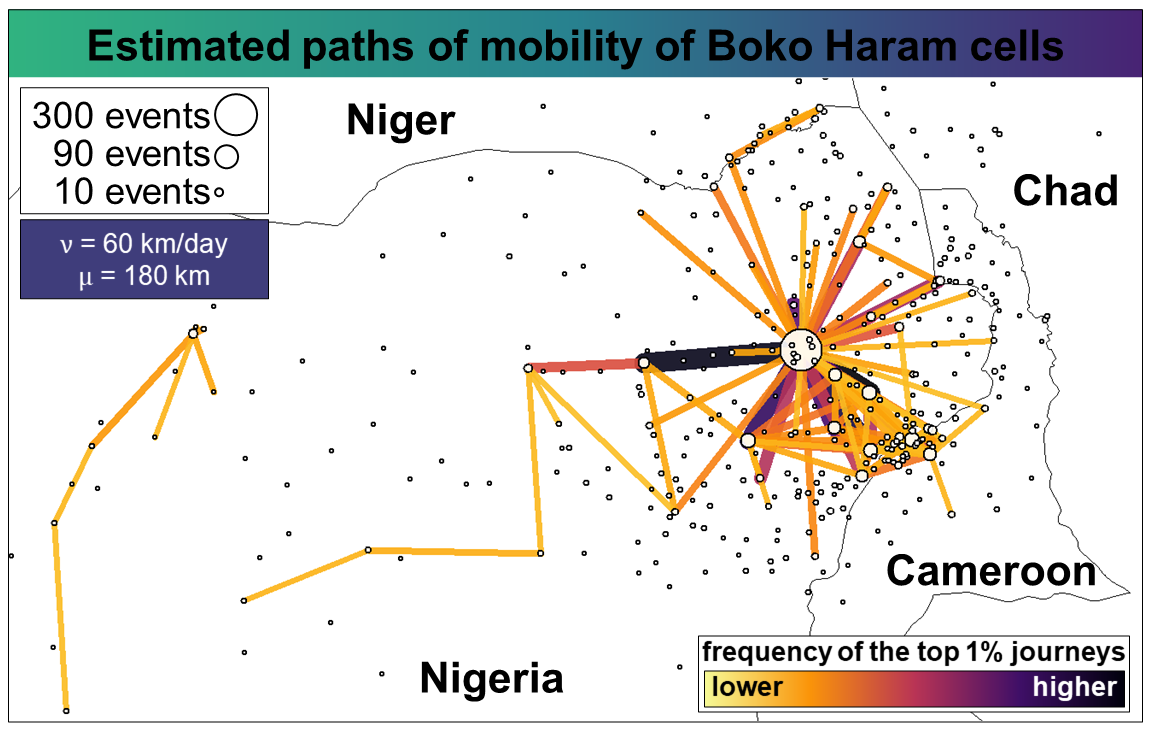 For each point in this graph, there are background simulations which give us these colors or values. So I can change it. If the group moves at high speeds, then there are at least 30 or 40 active cells. If they move at reasonable speeds, or between 0 and 90km a day, and reasonable maximum distances, we get at least 50 to 60, which is the best-case scenario for Boko Haram. If they move less distance or slower, we don’t know their movements, but there has to be 50 to 150 active cells. Or more.

The level of fragmentation is extremely large. Imagine trying to manage a medium-sized group of 50 cells, each one moving in different directions, without the best means of communication, social media posts, or WhatsApp messages. It shows us that the 50 different groups perhaps share a common goal or some objective in the medium or long-term, but are mostly uncoordinated on where to act and how, due to this fragmentation.

Why does this matter for sustainable cities?

In terms of urbanisation, it’s becoming increasingly relevant to understand all relevant factors. At the early stages in most models, there is a lot of migration from rural to urban. As time goes by, those rural towns in the 1960s become minor cities in the ‘90s, and medium-sized cities by 2020. This is what we’re observing in most parts of the world, which happens naturally, like in Europe and the U.S.

Boko Haram has displaced at least 2.2 million people, according to studies. With displacement comes reverse urbanisation. Maiduguri is one of the most attacked places in West Africa. People have to move away, or become refugees. Security fractures urbanisation, which is happening across West Africa. But there’s also a huge cost in terms of the economic effects of terrorism. There is little tourism and private investment in northeast Nigeria as a result. Terrorism in Nigeria costs thousands of formal employees, harms the country’s urbanisation, and creates refugees, from which it’s extremely difficult to transport food due to Boko Haram.

So what solutions can policymakers take from this?

Trying to apply crime prediction models to terrorism is impossible. If you say, ‘Let’s wait in this market in this city’ for the next attack, chances are you’ll never get it. However, this shows that Boko Haram cells move frequently between distant locations. So instead of trying to predict a point, we can think of routes through which they will move. There, we have much more predictive power. Maybe I put some of the Multinational Joint Task Force (the army constructed by Niger, Chad, Cameroon and Nigeria) along intercity routes. Cross-borders happen too frequently, so regional cooperation has to be at the center of the conversation.

When applying mobility studies to a terrorist organization, what do you hope people take away from this?

I tried to speak to three different communities. I’m happy to present a new application to the mobility studies field, so that the community can engage in researching organized crime. Secondly, to the community that does research in situ: look at mobility and cross-borders. And finally, security research is often conducted by anthropologists and sociologists. I’d like to propose a multidisciplinary approach with quantitative studies, which can be complementary. That’s my message: get out of your sociology bubble.