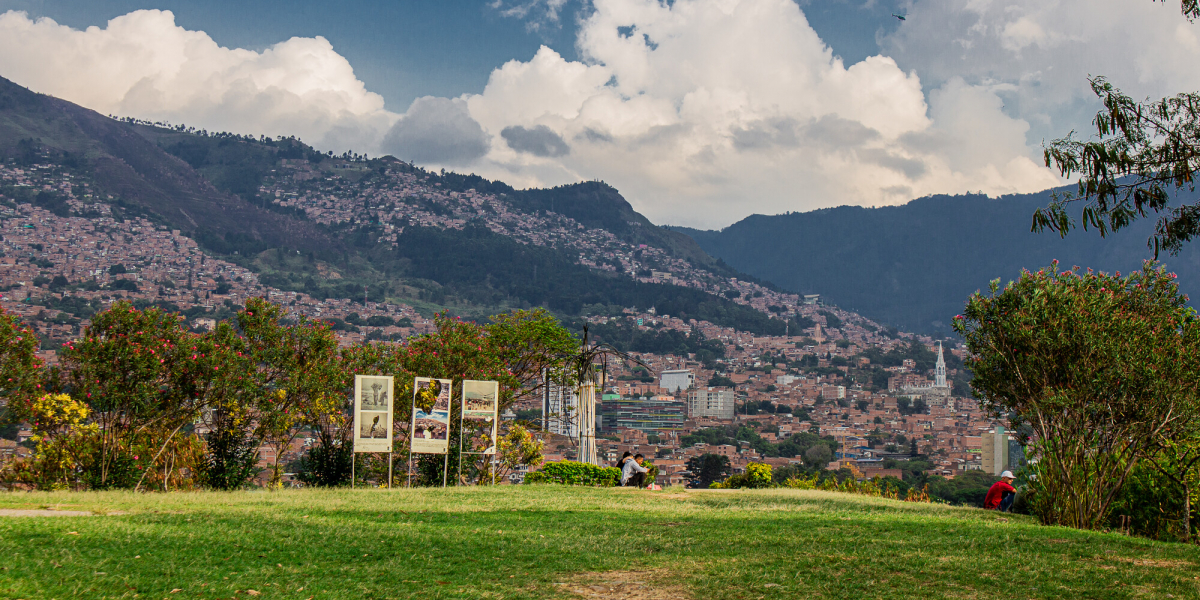 Urban green space in Medellín: Who has the least?

If we have learned anything in recent months, it is the impact of urban green spaces on our wellbeing. They are known to help reduce air, noise and heat pollution, while also providing pleasant and relaxing views. They are directly related to a number of health and well-being benefits, like promoting physical activity, improving social engagement and reducing psychological stress and depression, among others.

But not everyone has access to these spaces. As urban population grows, the availability of urban green spaces gets reduced. On top of that, not all urban dwellers can enjoy green spaces the same, with some social groups having access to much more green space in their surrounding neighbourhoods than others. This situation is increasingly recognized as an issue of environmental justice that requires further attention.

Environmental justice is a concept defined by the US Environmental Protection Agency (EPA) as the “fair treatment and meaningful involvement of all people” regardless of background in regard to how environmental policies are developed, implemented, and carried out. In the context of urban green space, environmental justice equates to equal access for all urban dwellers, which fits directly into the UN Sustainable Development Goal 11 of creating cities and human settlements that are more “inclusive, safe, resilient and sustainable.” SDG11 has a 2030 target of providing universal access to green spaces, particularly for women and children, older persons and people with disabilities — vulnerable voices who tend to go overlooked in urban decision-making.

So how does that play out in Medellín, Colombia?

In the image below, we show two different areas of the city as they appear in satellite image on Google Maps. One is the most affluent neighborhood, and the other is one of the poorest. Can you guess which is which?

As part of our work in the PEAK Urban project, we here at the RiSE Group in EAFIT University are using open satellite imagery to assess the dynamics of urban green space availability across different income groups in the city of Medellín from 1984 to 2018. By doing so, we hope to raise awareness of this issue given the multiple stated benefits that green space can deliver to urban dwellers — as well as the perceived imbalance in its availability within the city.

We first utilized eight images from the Landsat archive, a valuable resource for freely accessing and downloading the Landsat satellite imagery taken since the 1970s. Below, you can see these images in a colour composite, in which vegetation appear red, contrasting well with the cyan-blue of the developed areas. 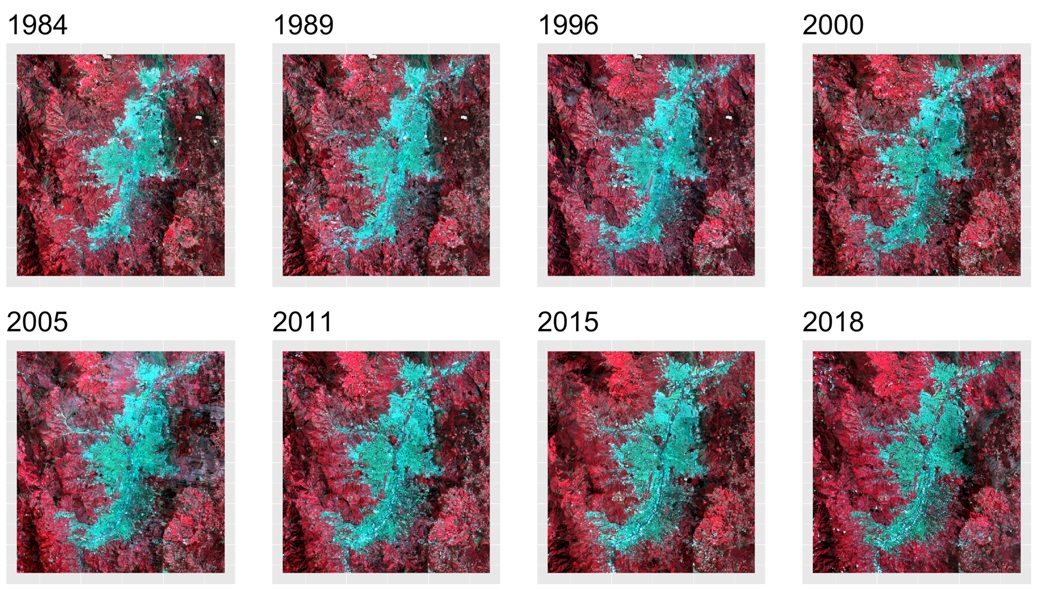 Once done, we leveraged a well-known index called the Normalized Difference Vegetation Index to estimate the amount of green around any given location. Then we incorporated information from the city’s land-use map to identify residential areas, and the Colombian socioeconomic stratification system to differentiate those areas according to their socioeconomic status (SES). This system classifies residential households into six classes, six being the wealthier and one the poorest, which acts as a good proxy for the SES of the urban population. We then reclassified that data into three classes — low, medium and high SES — and took a balanced sample (an equal number of observations within each class) to perform the analysis.

By combining those datasets, we can estimate the amount of green around residential areas of different SES and compare that data for the three different population groups. 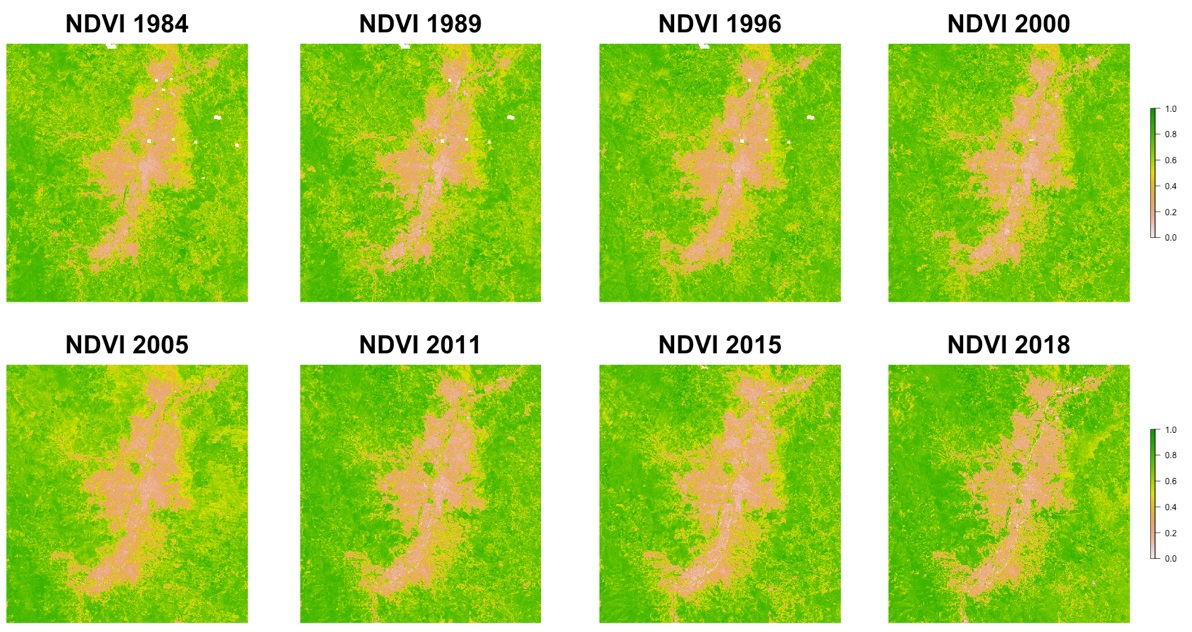 Initially, we were expecting that the low SES had the lowest availability throughout the whole period. But our analysis indicated that the middle-class had less green space availability between 1984 and 2005 than the other two groups. From then on, the low-class became the least favored, as expected. Group differences significantly increased from 1984 to 2015, but then started to decrease in recent years, indicating that the contemporary planning tools put in place by local administrations seem to be reducing the disparities.

When looking to the ten percent of residential blocks with the lowest green space availability in 2018, we found that half of those blocks belong to the medium SES class. We then used that information to map those locations, which can be useful to focus future interventions aimed at increasing the amount of — and equitable access to — green spaces across the city. Ultimately, this could help to push the conversation forward with local authorities.

Furthermore, we think that approaches like these are simple yet powerful anywhere. It doesn’t require costly data, and was entirely implemented using open software tools like R, Python and QGIS. The data processing workflow is quite straightforward, and only demands basic knowledge of geospatial data and remote sensing image processing. In other words: you don’t need to be a geospatial expert to implement this in your city.

We firmly believe that a universal approach like this could empower citizens and relevant interest groups to better understand what is happening in their cities, in order to demand action from their local authorities around the vital issues of environmental justice and equity.

Jorge E. Patiño is a postdoctoral researcher on the EAFIT team. His research focuses on the use of remote sensing and spatial data for regional science applications in urban areas, and on the use of spatial analysis tools to better understand environmental issues.