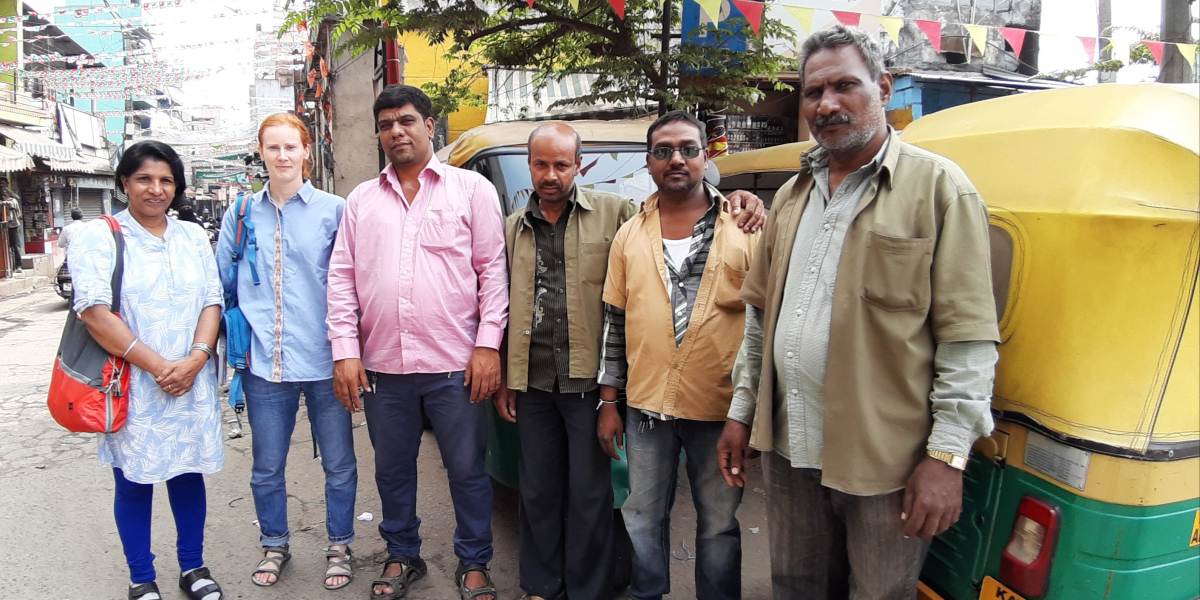 PEAK researcher Lucy Barker has been awarded a grant from the University of Oxford’s Public Engagement with Research (PER) Seed Fund. The grant will support Lucy to make a short public information film on the auto-rickshaws in Bangalore, an idea that came to her during her recent PEAK research.

She will be working with PEAK partner IIHS to produce a short film 10-12 minute film which will be available in English with Hindi subtitles, and with a version dubbed in Kannada. The film aims to inform young middle class commuters who hire the auto-rickshaws about the conditions facing drivers in recent years. Lucy's recent blog describes some of the constraints facing drivers, often including huge financial burdens and harassment.

Taxi-like mobility services are increasingly booked through smart phones, yet, commuters are often unaware of the impacts that changes in technologies have for drivers who often are low-income citizens and heavily reliant on cash for everyday transactions like food and utility bills.

"These new technologies promise to increase the efficiency of user-operator encounters, yet my research shows why drivers cannot fully transition to accept digital fares that meet the needs of middle-class millennials" says Lucy.

"This has resulted in daily conflicts between the public and drivers as payments are negotiated and the public feel they are getting a poor service".

The  film will follow the day-to-day lives of auto-rickshaw drivers and will demonstrate both the positive and negative effects of the emerging technical systems for both drivers and users.

"I’m hoping to find out (through surveys before and after watching the film) what impact the film has on changing perceptions among the public regarding Bangalore's transport operators after becoming aware of the various difficult issues drivers have with loans and technologies, among other things".

This University of Oxford small grants scheme provides funds for researchers to develop, deliver and evaluate Public Engagement with Research projects and activities. The fund is supported by the University’s Higher Education Innovation Fund (HEIF). More information on the scheme can be found here.