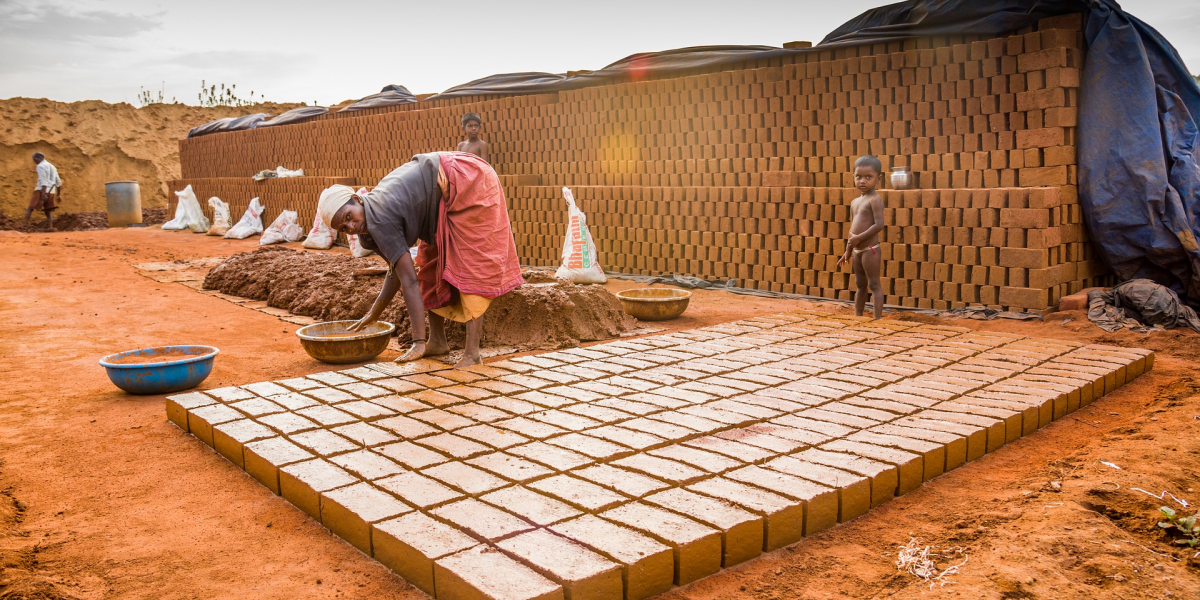 Ankit, who is 2 months old, is asleep at a creche near a construction site in Ahmedabad. His mother Sujata, walks into the creche in the afternoon, kneels by the wall, and feeds him. In about 15 minutes where she also manages a quick stroll carrying Ankit*, she has to leave. This is one of only two breaks that Sujata is allowed to take in the day to breastfeed her infant – and a contributing factor to Ankit being underweight, at only 3.4 kg.

Sujata is one of the thousands of Indian women who undertake seasonal migration to work on construction sites in urban areas.

The construction sector in India is one of the largest employers of labour in the country, and about 10% of the workers are women. The sector is heavily dependent on migrant workers, many of whom come to the city with their children.

While the sector provides employment opportunities to migrant households, it has serious implications for the health and educational outcomes of children. Despite the vast number of children at construction sites, there have been no systematic efforts to enumerate them, and as a result their nutritional and health experiences remain grossly undocumented and unaddressed.

According to the National Family Health Survey (2015-’16), 35.5% of children under the age of five in the country are underweight, 38.4% are stunted, 21% are wasted. The prevalence is highest among Scheduled Tribe and Scheduled Caste groups, to which most of the children in the study belong.

Undernutrition is attributed to a complex interplay of factors including poor dietary intake, unhealthy living environment, and inadequate access to healthcare. In the context of migration and parents’ work environment, several of these issues are more severe.

Like Sujata, many women working at construction sites faced constraints because of their work environment. Anita, a young mother shared, “When we are at work, we cannot come often to feed the child. The contractor doesn’t allow us.”

Women also expressed discomfort in breastfeeding in front of others at the worksite. As Sapna noted, “Everybody is watching. It doesn’t feel good. So, I try to come back every few hours, but it’s not possible every day.”

The World Health Organisation recommends exclusive breastfeeding for the first six months after birth as it provides ideal and adequate nutrition, has developmental and cognitive benefits, and provides immunologic protection to infants from acute and chronic diseases.

But because of their work conditions, several mothers couldn’t practice exclusive breastfeeding, and were forced to introduce cow’s milk or milk powder mixed in water into their infant’s diet. This was more common when the infant was left in the care of an older sibling. A doctor interviewed for this study said: “When he or she is crying unendingly, the sibling is forced to give water. How much can we expect from an eight or ten-year-old child looking after a baby?”

Though mothers couldn’t undertake exclusive breastfeeding in the first six months,  breastmilk still continued to remain the dietary mainstay of the child even in their later years.

Complementary feeding after the first six months and dietary diversity are critical to increase a growing child’s nutrient intake and energy needs. However, mothers found it difficult to make this transition from breastfeeding because of the triple burden of construction work, childcare and domestic chores.

When asked to recall what they had consumed in a 24-hour period, none of the children reported eggs, dairy products, fruits or leafy greens, and only four out of fifty mothers reported cooking meat in the previous month. Children also were found to consume copious amounts of packaged food such as chips and biscuits. With a laborious 12-hour workday, mothers weren’t left with many alternatives in the absence of affordable, healthy packaged food.

Labour colonies at most construction sites were providing water and sanitation facilities. However, in most cases, the same source of water was used for chores as well as for consumption – a fact that parents worried about constantly.

“We always find insects in the water. What can we do? We have to drink this,” complained Rani, a young mother. Sanitation facilities were also inadequate and not well maintained.

A father said, “The water is so dirty here. Even we fall ill. Children are going to be more affected.”

Further escalating this are time and money constraints that make it difficult for parents to access healthcare services even when children fell frequently ill. Going to the doctor means having to take leave from work, which would result in loss of wages as 90% of work in the construction industry is informal. Parents were paid irregularly, and were often at the mercy of the contractor.

Kumar, a father, said, “We go to the doctor only if the child is very sick. Otherwise, every time we go, the doctor prescribes a glucose bottle, and every trip costs us at least Rs. 500.”

The issues with access to healthcare also applied to mothers among whom there was a low uptake of antenatal check-ups during their pregnancy, which are essential for a safe pregnancy and health of the child. However, only 6 women out of the 50 interviewed had been to antenatal care check-ups.

The children in this study had access to day care centres run by not-for-profit organisations. However, mothers noted that such facilities were rarely available in other sites, though the Building and Other Construction Workers’ Act mandates the provision of day care facilities at worksites that have fifty or more female workers. Those who have no creche facilities are  exposed to even higher levels of environmental pollution and danger as well as limited access to nutritious food.

Missions like Poshan Abhiyaan are concentrating efforts to reduce undernutrition in the country by recognising a range of factors that affect nutrition. However, it is also critical to view the role of parental work environment and migration as factors contributing to undernutrition. Policies and interventions designed to address undernutrition must consider these as key factors without which such children would continue to be denied a chance of improved nutrition and better health.

*All names have been changed to protect identities.

This piece was first published on scroll.in (How labour conditions at construction sites are leading to higher rates of child malnutrition ) on 27 September 27 2019. It is is based on research conducted by Divya as a part of her PhD.