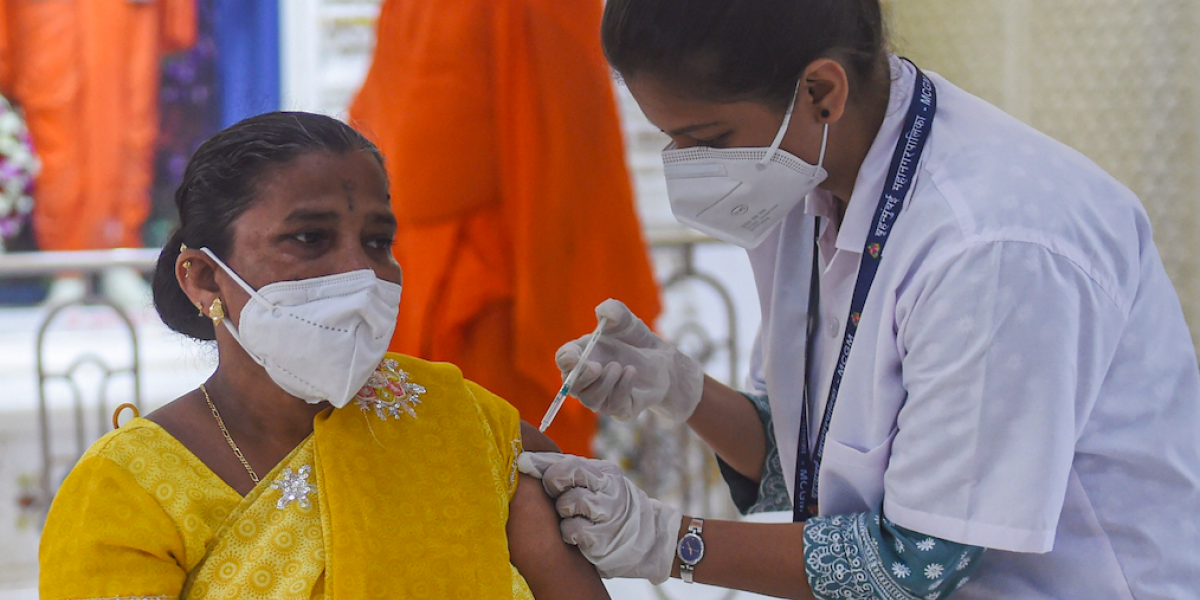 The COVID-19 pandemic and consequent lockdowns have had a devastating impact on India’s informal sector, which employs a vast majority of the country’s workforce. Even as India struggles to extend vaccine coverage amid severe shortage and a deadly second wave, it is critical that this process prioritises the millions of informal workers who are at risk of exposure to the virus and also face loss of livelihoods.

While healthcare workers and other frontline workers were inoculated in the initial drives in January and February this year, at present, the eligibility for vaccination is based on age. Given the acute shortage, most states continue to prioritise those above 45 years. Aside from poor planning hampering its production, India’s flawed strategy to inoculate its population is driven by technology. This approach has excluded millions of informal workers from the vaccination drive.

It is estimated that approximately 70% of the urban workforce is employed informally, including migrant workers. The precarious nature of their work exposes informal workers to unsafe work conditions that increases their risk of exposure to COVID-19. Given the density of and lack of isolation facilities where workers live and work, containing the risk of transmission is a challenge.

Informal workers such as those who work at construction sites or garment factories are known to have other co-morbidities like tuberculosis, which makes them even more susceptible to the virus. If infected, they do not have recourse to paid leave, social protection or health benefits that are available to workers in formal employment. Yet, they continue to work as they cannot afford wage loss nor are they able to work from home.

The COVID-19 vaccine can provide critical protection and reduce the risk of mortality and is seen as a key antidote out of this crisis and a bulwark against an anticipated third wave. And yet, informal workers are less likely to be vaccinated due to multiple barriers in the existing vaccination framework.

First, the vaccine strategy is heavily dependent on technology and restricted by age. Online registration is mandatory for those in the 18-45 age group. This benefits urban dwellers with resources, but a large proportion of workers lack digital literacy and do not have access to devices or internet.

Moreover, a bulk of the informal workforce are in the 18-45 age group due to the arduous nature of work. Priority by age group and technology driven-vaccination programmes have led to vaccine disparities. In households where no one has received vaccination, it is imperative to vaccinate earning members of the family, regardless of age and access to devices, so they are protected and can continue to work.

Second, wherever possible, employers must be roped in to help vaccination reach a larger population of workers. Like several private corporate organisations that have made commitments to vaccinate employees and their families, in some sectors it may be possible to extend vaccination to informal workers through the channel of employment.

For example, in the construction sector or in large manufacturing clusters and garment factories, employers can play an active role in facilitating this process. Similarly, in cities like Mumbai, where the municipal corporation is planning to conduct vaccination drives in residential areas, those employed as domestic workers, drivers, gardeners and security guards must also be able to avail the same. The threat of contracting the virus is higher for those whose place of work is others’ homes.

In March, the Confederation of Real Estate Developers Associations of India (CREDAI) announced on Twitter that the incoming president of the body had committed to vaccinate 2.5 crore construction workers free of cost. While there have been no updates thereafter, industrial hubs or worksites seem to be optimal venues for vaccination drives. It may be worthwhile to use CREDAI’s network or even explore the possibility of the Building and Other Construction Workers’ (BOCW) Welfare Board organising vaccination for workers. However, the cost of procuring and administering vaccines or any related expenditure should be borne by the employer or the authority facilitating the same and not transferred to the worker.

It may not be viable for smaller employers who do not have enough capital or are struggling to recover from last year’s production losses to support such initiatives. In several other types of informal work – self-employed; domestic workers who work under multiple employers; those who are part of larger supply chains without clear employer-employee relationships — routing vaccination through employers might not be possible.

Decentralised and free walk-in facilities that are located either in informal settlements or near clusters of small units can benefit workers. These centres must also operate at hours that are most conducive to workers so that they do not lose productive work time.

Third, the build up to a vaccination drive should focus on strong public health messaging. Since many workers do not have access to news media or social media, it is necessary to explore other modes of communication to bust myths around vaccination. This is important to make sure the process of consent is not compromised.

There is vaccine hesitancy as it is associated with possible side effects. The need for rest after vaccination also implies wage loss. Employers and contractors are hesitant to encourage vaccination since it may disrupt production cycles. There is also a fear of being held accountable in case of any mishaps.

Clearly communicating the benefits and necessity of the vaccine as well as assuaging employee concerns regarding loss of pay may help garner support. Vaccination is a right and a necessity, needed to protect lives and livelihoods.

Fourth, owing to the high cost of vaccine acquisition and delivery, state governments are beginning to restrict vaccination by domicile status. For instance, the Uttar Pradesh government recently declared that first preference will be given to locals. This is ironic considering that UP sends out more migrants than it receives.

Migrants, who have arrived from Surat in Gujarat, walk to board buses to reach their native places, in Prayagraj. Photo: PTI

A large section of migrants belong to disadvantaged caste groups that already experience poorer health outcomes. Exclusion from the vaccination programme can push them into a deeper health crisis. The experience of 2020’s nationwide lockdown tells us that migrant workers are often the last to receive any form of relief, ration or cash transfers. The same must not be repeated in the case of vaccines. Migrants must be able to take the doses irrespective of their location.

Informal workers are already struggling to cope in an altered labour market with fewer opportunities and reduced wages. Hence, vaccinating informal workers must be considered a priority not merely because they build and sustain our cities, but also because it is the only way to reduce vaccine disparities. As noted by ‘Women in Informal Employment: Globalizing and Organizing’ (WEIGO) access to vaccines is inseparable from economic justice and “critical to ‘soften the blow’ of a triple health-economic-care crisis.”