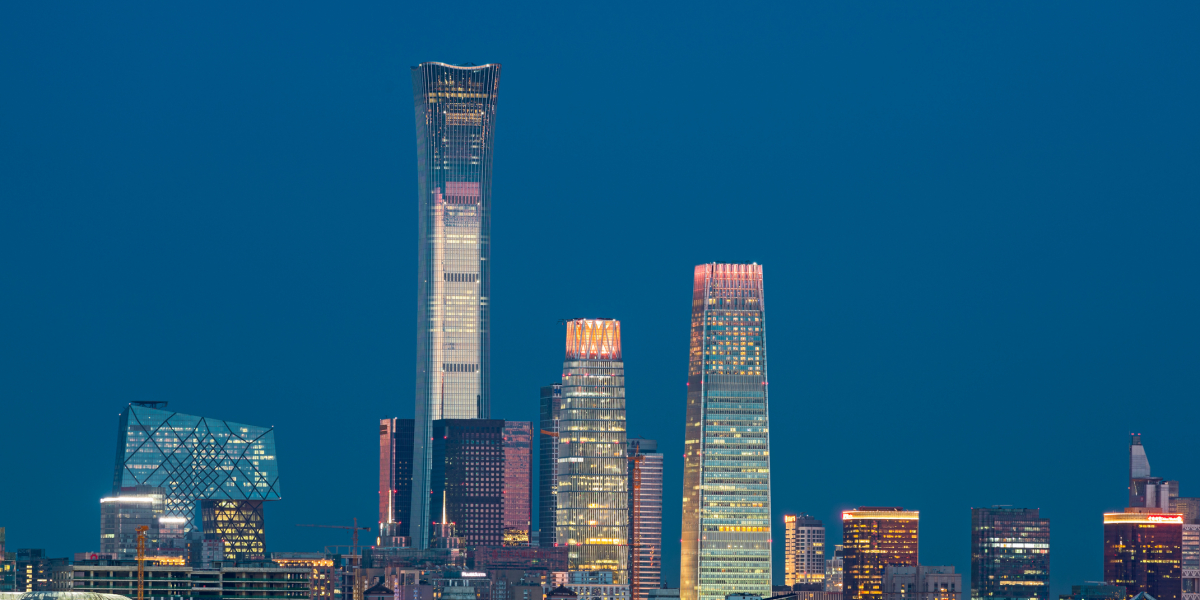 What Can the Growth of the Beijing Metropolitan Area Teach Us About Cities?

By the end of 2017, Beijing had a population of 21.7 million and an urbanisation rate of 86.5%. In the past 30 years or so, the city’s population has nearly tripled, and its build-up area has nearly eight-folded, making it one of the largest cities in the world. At the same time, Beijing has transformed into a service economy, and the employment share in the service sectors has more than doubled. The capital city is no longer a simple urban agglomeration but has truly evolved into a full-on metropolitan area (Beijing Metropolitan Area, or BMA).

Our research has sought to better pinpoint the boundaries of one of the most remarkable urbanisations on the planet, and attempted to unveil what underpinned the changes undergone by this dynamic area.

We can understand a metropolitan area as an integrated functional unit, in which a densely populated urban core is closely connected with the less-populated surrounding territories. Developed countries generally define the urban core by population size, and the functionally related peripheries by commuting rate.

But this method is not suitable for the BMA. For one thing, commuting data is still largely unavailable; and for another, most Chinese metropolitan areas are developed more through the spill-over of non-agricultural activities than through that of residents. Thus, as with many other scholars specialized in studying Chinese metropolitan areas, we use the development of non-agricultural activities instead (Hu, Zhou, and Gu. 2000).

By 2010, the BMA had 13 outer counties. Six of them were already part of the area in 1995. The other seven counties were incorporated between 1995 and 2010. In the first five years of this period, the expansion of the BMA was moderate. Only Miyun (the easternmost point of Beijing) and Sanhe (a county in the Langfang Prefecture bordering Beijing) had been incorporated. Then the next five years (2000-2005) saw an accelerated spatial expansion: three counties within Beijing (Pinggu, Daxing and Yanqing) and one county outside Beijing (Dachang) were incorporated.

The expansion then started to slow down between 2005 and 2010. In this period, only Xianghe was integrated into the already fully developed BMA. The large spatial coverage in 1995 and the continuous expansion in the following 15 years indicate that the BMA not only had an early formation, but also became very dynamic soon after. 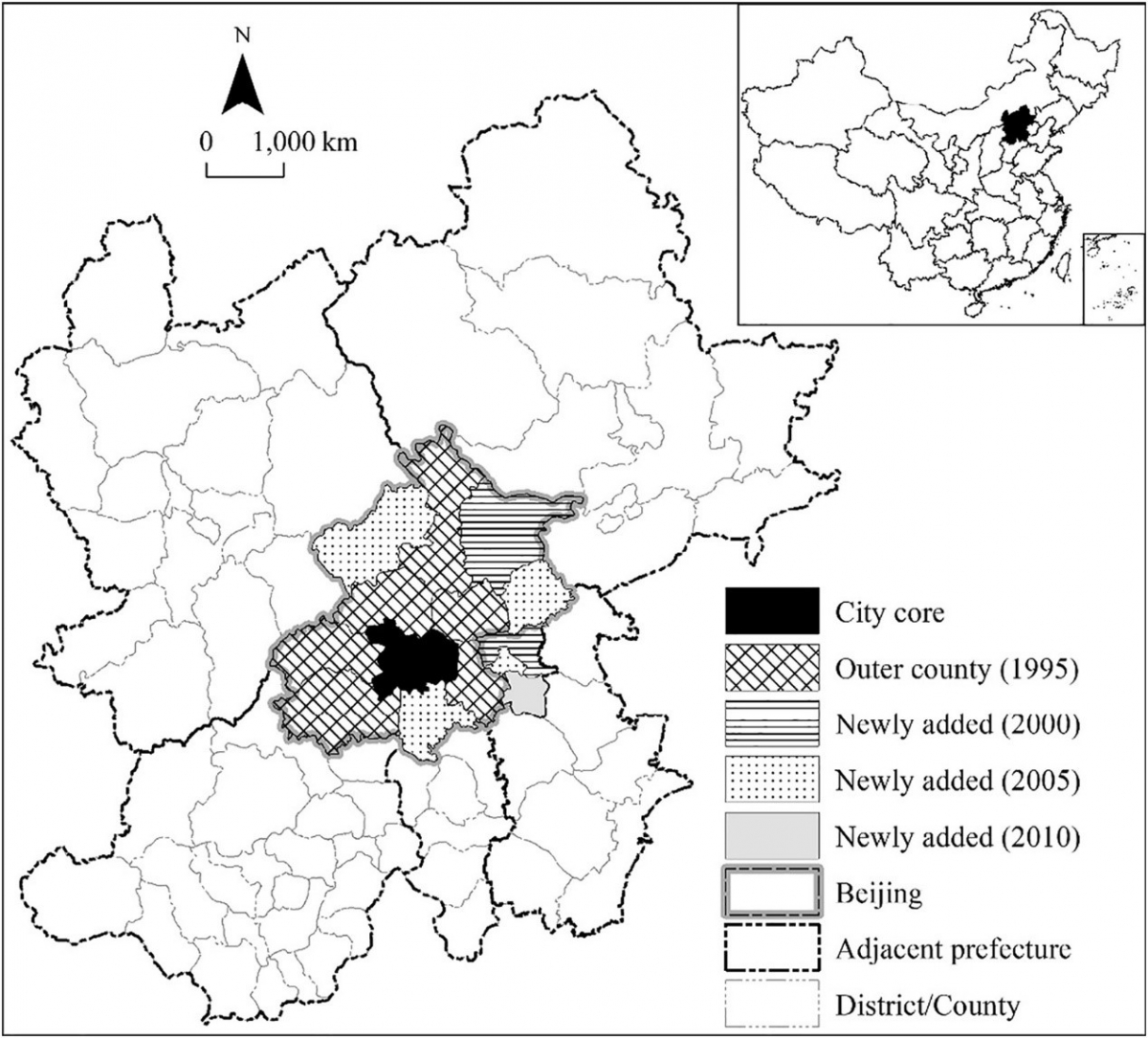 The dramatic expansion of the BMA after 1995 is a result of a mutual-reinforcing process between industrialisation and suburbanisation. Some counties, such as Daxing, became part of the BMA mainly because of their strong economic connections with the city core. In Daxing, an economic-technological development area was set up in 1996 which is now the most successful one among all the development areas in Beijing. Other counties, such as Sanhe, were counted as part of the BMA mainly because they accommodate thousands of commuters who work in the city core. Even though Sanhe belongs to Langfang prefecture, many people still refer it as ‘Beijing’s suburb’ (Yan Jiao).

In addition, although counties have chosen different connections with the city core, they are not tied to that connection forever. Instead, the two types of connections are interchangeable in the course of the development of these counties. For example, Daxing has evolved into a favourable county for urban commuters as its economic development has enhanced the infrastructures and services.

The experience of Beijing has revealed that industrialisation and suburbanisation reinforce each other, and that urbanisation is not simply a linear process. Especially for fast-developing areas, the two types of connections co-exist, and their co-existence partly explains why these areas develop much faster than their predecessors which usually have these connections not simultaneously but one after the other.

Spilling over the Administrative Boundaries

Since 2000, the BMA has been covering an area that is beyond the administrative boundaries. This ‘transcending’ reflects the functional concept of metropolitan areas.

The first time this ‘transcending’ occurred was in 2000. At that time, Sanhe, a county under the jurisdiction of the Langfang Prefecture, was already part of the BMA, even though three districts in Beijing were still not. This ‘transcending’ progressed: another two counties in the Langfang Prefecture were further incorporated in the following decade.

The continued spatial invasion into adjacent jurisdictions shows the strong influence of the city core. It also confirms the hypothesis that the spatial coverage of metropolitan areas is only partially dependent on jurisdictions and should therefore be analysed beyond the administrative lens. In studying mega-cities such as Beijing, the focus should not focus on the administrative area of these cities per se, the broader regions around them should also be taken into consideration.

The BMA has seen continuous economic growth throughout 1995–2010. This growth was predominantly contributed to by the city core. This is especially the case since 2000, with that contribution being raised to an extraordinary level.

What underlies the sudden rise might be a larger shift in the relationship between the city core and the peripheries.

Despite the spatial expansion of the BMA, its economy is increasingly powered by the city core which is very small in the size of land. The dominant economic sector in this area is dramatically different from that in 1995. Whereas twenty years ago the BMA still heavily relied on manufacturing, now the BMA is famous for high-tech and finance. These emerging sectors require much smaller land and much denser concentration and have a strong preference for the city core with preeminent economic, social and cultural infrastructures. However, their emergence also inevitably leads to a greater economic gap between the core and periphery, although counties within peripheries have converged economically. This new dimension of inequality inherent to the new economy is not limited to Beijing. For example, economic gap among boroughs in London has also increased with London’s transition into a financial centre and a global city. Given that this inequality comes from the market, the solution to it may requires some state interventions in market mechanisms, interventions that unfortunately have been dismissed by the neoliberal ideologies.

Albeit with a focus on the evolution of the BMA per se, the report has important practical implications for cities everywhere, which have already been touched earlier in this report and is summarised as below.

First, there is no one-suits-all criteria on which metropolitan areas are delineated; that criteria instead should be subject to local contexts.

Second, different mechanisms through which metropolitan areas expand are not mutually exclusive, but can co-exist in one metropolitan area and are interchangeable in the course of metropolitan development. This is especially the case for fast-developing areas which have compressed what have taken advanced societies centuries for into a few decades.

Third, it is entirely possible that the influence of metropolitan areas goes beyond the administrative boundaries and hence it is necessary to take wider region into consideration when analysing mega-cities such as Beijing and London.

Fourth, the economic base in many metropolitan areas has transformed to the one that favours the city core and leaves the peripheries behind, which is the case in the BMA. Hence, state interventions are probably needed in counterbalance this new form of intra-metropolitan inequality.

This is a part of a paper first published on Cities (Urban spillover or rural industrialisation: Which drives the growth of Beijing Metropolitan Area) on 4 June 2019.