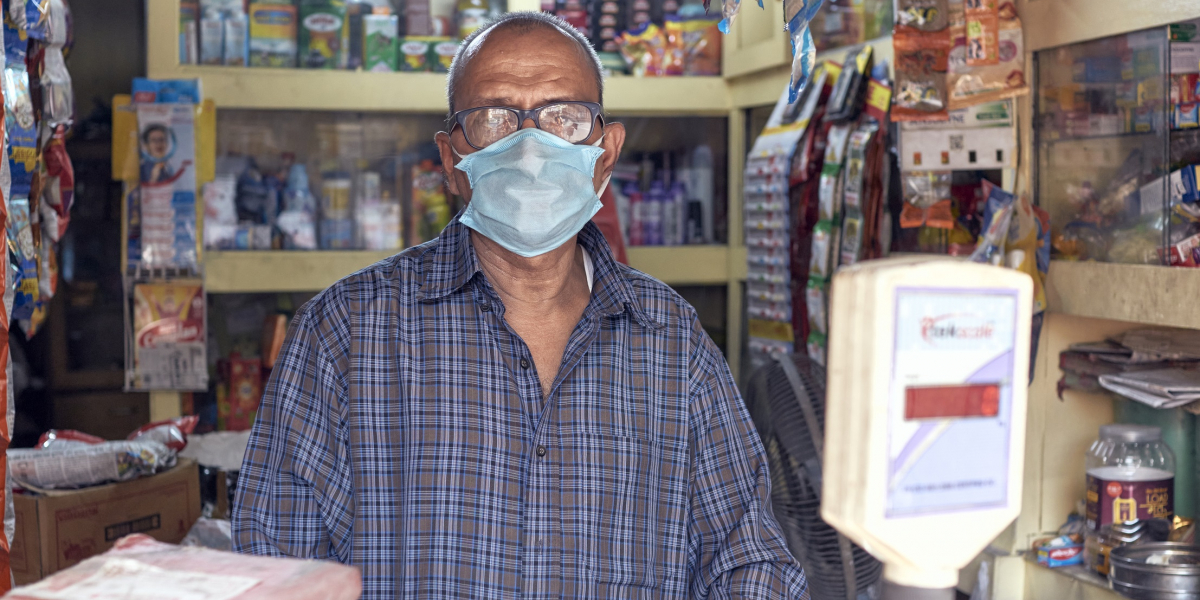 An edited version of this blog appeared on Thompson Reuters News on 14 December 2020.

About half of wage earners in Colombia found themselves in the informal economy last year—working unregulated jobs with flexibility, but also, minimal social protection. In smaller cities, that portion was even greater. Although rates have declined in recent years, informality has remained a major hurdle to growth. “Before the pandemic, we were in a fragile situation, economically,” says Mauricio Quiñones Domínguez, an economist based in Medellín.

Then COVID-19 hit. Already with one of the highest unemployment rates in Latin America, the hard-hit country has seen the portion of jobless rise to an unprecedented 21.2 percent. (It now hovers around 16 percent, although ‘real’ unemployment could be much higher.) And informality, which statistics often have difficulty pinpointing, is expected to follow, reversing years’ worth of effort to formalize more sectors.

The diverse range of informal workers in Colombia—from shop owners and vendors to couriers and traders—was ill-suited for a prolonged public health crisis. Women and low-income populations are overrepresented. Nearly half of informal workers have about three months of savings, compared to just seven percent of formal workers. And notable differences lie in mental and physical well-being.

“That fragility has only gotten worse,” adds Domínguez. “The prediction is that the informality will increase, because fundamentally we don’t have a policy for welfare strong enough to support this kind of work, which is massive.”

But this phenomenon isn’t limited to Colombia. According to the United Nations, an estimated 1 billion informal workers are on the verge of poverty after the COVID-19 outbreak—a staggering 12.5 percent of the global population. And while countries chart recovery strategies, investment has largely targeted formal employers and employees, overlooking a growing critical mass.

Long before the pandemic, researchers at PEAK Urban—an international initiative based out of the University of Oxford, including Domínguez—had studied the various ways informal sectors interact in cities. Now facing an existential crisis, their work sheds new light on how these sectors are coping with the pandemic, and what can be done to ensure that the informal economy isn’t forgotten.

Nobukhosi Ngwenya, a PEAK researcher at the Africa Centre for Cities in Cape Town, South Africa, was studying land occupations and resulting settlements—often informal in nature—when lockdown started. Like other countries, a moratorium on evictions was announced, providing cursory relief to occupiers. But that didn’t stop economic harm from ensuing.

“The occupiers who were employed have lost their income, which has heightened food insecurity, amongst other challenges—not just for those households, since many provide for extended family members,” says Ngwenya. “It also impacted the occupiers who own spaza shops [informal convenience shops] as the number of clients decreased. Owners and hawkers were dealt an additional blow as many of them were unable to get permits to continue trade during the stricter levels of lockdown, even though they provide essential services to residents.”

As was the case in Colombia, informal traders in Cape Town, which are predominantly women, were unable to qualify for substantial government aid due to onerous restrictions, like formal registration, tax clearance and bank statements. Ngwenya argues that provisions and social grants must find their way to informal traders, but data for targeted delivery is currently limited. “We have an idea, but we actually do not know what, for example, the demand for housing is and the nature of that demand,” she said. “If this data was available, we would be able to design housing programmes that actually meet the needs of beneficiaries.”

As a result, NGOs have largely filled the aid vacuum. Neil R. Hassan, a PEAK researcher who focuses on HIV-related interventions in Cape Town, says that NGOs that help  LGBTQ+ populations, many of whom are involved in informal work and live in informal settlements, have historically functioned without funding and government support. But while community-based engagement was important before COVID, the outbreak—which limited physical contact and mobility—forced NGOs “to improvise.”

“NGOs have had to very rapidly realign their services and increase their presence via social media platforms, like Facebook,” says Hassan. They provided mobile data for impacted populations so they could attend online events, and food parcels, which skyrocketed in demand, had to be doled out while maintaining safety protocols. But lockdown restrictions meant safe usage of antiretroviral therapies, a key role, had less oversight. “I believe this is partly due to restricted contact with NGOs,” said Hassan, “as well as other COVID-19 protocols such as social distancing and limited mobility.”

In India, a short window of time before national lockdown began in March sent informal workers reeling. Bhawani Buswala, a PEAK researcher based in Oxford, heard from e-rickshaw drivers in Delhi, who often operate outside regulatory frameworks. “In May, the Delhi government had announced a 5000 INR (£50) one-time financial assistance to e-rickshaw drivers in the city,” said Buswala. “But many drivers found it difficult to avail this assistance.”

Loans on e-rickshaw batteries slowly accrued interest, costing about six times the amount of the assistance, which dried up months ago. Ridership collapsed and has not yet fully recovered. To one driver he spoke with, Buswala says that the combined impact will be long-lasting. “The city has started to unlock,” he said. “But his e-rickshaw is chained up, the battery is long dead, and the debt is becoming heavy.”

Many informal workers in New Delhi are migrants, who come to the capital city for better-paying jobs to send money back home. Bani Gill, a PEAK researcher based in Oxford, spoke with African migrants there who rely on an informal banking system for their livelihoods. It is one built upon meetups with trusted intermediaries, often migrants themselves. COVID-19 disrupted everything.

“The lockdown immobilized bodies as well as capital, leaving many migrants strapped for cash in India,” says Gill. “While both the centre and various state governments have announced relief packages for the most vulnerable, international migrants have fallen through the cracks as they are not eligible for any such support.”

Those who could leave the city did, but others who without resources or borrowing capabilities to make it through lockdown were stuck in place. Meanwhile, certain areas, like Tughlakabad Extension—home to a substantial population of African migrants—were declared ‘containment zones,’ with police barricading points of entry and exit. “The hardships of the pandemic are amplified by the anxieties caused by such heightened state presence,” says Gill.

While a global discussion around sustained assistance, like universal basic income (UBI), has accelerated since the pandemic, researchers argue the outbreak should alert policymakers to the precariousness of informality, and spurn them into addressing more systemic root causes.

“Rethinking informality is a fundamental issue in economics,” says Mauricio Quiñones Domínguez, the Medellín-based PEAK researcher and economist. “The institutional structure is a constraint on the small businesses and entrepreneurs, so in some way, we need to create the appropriate structure for not penalizing these low-level initiatives for economics.”

Data could certainly help. The pandemic has sped up financial inclusivity, as more payments go contactless or mobile, generating huge new swaths of data for researchers to analyse. In another example, Domínguez used Google Maps Street View to plot informal storefronts, which are often overlooked in planning. “When we talk about informality, we focus on the person and self, but there are also informal businesses with no regulation that affect payment,” he says.

But there are two structural challenges that persist, says Juan Carlos Duque, a PEAK researcher also based in Medellín. The first is optimizing economic distribution: “We have the economic resources to help people, but the system we have in place to distribute them is a mess,” he adds.

The second is changing perceptions around informality and formality; the former can exist as an innovative labour pool available to traditionally marginalized populations, and the latter doesn’t have to be synonymous with bureaucracy. “For many informal workers, formal means more taxes, responsibilities, paperwork… they link formality with problems,” Duque adds. “So, if that way of thinking doesn’t change, then transitioning will be difficult.”

About 70 percent of the tourism industry in Medellín is informal, he explains, and officials believe that the lasting impact of COVID on travel will push workers into formal roles in order to qualify for more aid if another crisis unfolds. But Duque believes that for informal workers, immediate security is top priority; in order for a larger shift to take place, government has to make a better argument: “Moving to the formal should mean more clients, benefits, access to education, training, or being a part of a promotion that will bring more clients to me.”

Because of its very nature, Duque says informality often holds a nefarious stigma. (Think of phrases like “shadow economy” or “black market.”) But this misconception, buttressed by a lack of information, leads policymakers and practitioners to overlook what has long been an essential cog in the global economy. A more nuanced understanding of informality in the devastating wake of COVID-19 could help build back a stronger social safety net for all.

“We have to depoliticize the decision-making process,” Duque stressed. “If you put science in that, it’ll be much easier to show the reasons why you can make some decisions—and also the connections you cannot see in other ways.”